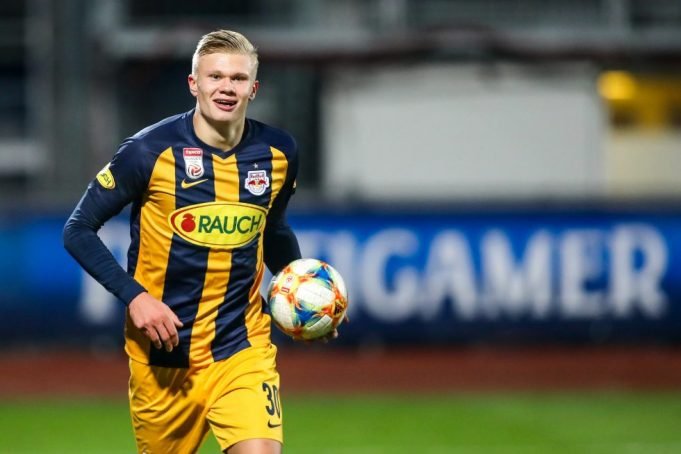 Real Madrid are coming off fresh from a La Liga winning season and looking troubled. Karim Benzema has been their best player but he needs someone to share the responsibility of scoring.

He is a complete forward who brings other players into the game. The Galacticos will be a targeting a player like him who can do everything up front.

So with a potential fall looming, what are Real Madrid going to do about going back to winning ways?

Real Madrid should also sign better players. So, with that in mind- who will be the Real Madrid Transfer Targets 2022? Well you’re going to find out. Watch & Bet Football Live >

As of November 2020, Haaland has 19 Bundesliga goals in 21 appearances already. Nobody is replicating that sort of scoring form in players of his age group. Haaland seems destined for greatness and he might have to move out of Dortmund to achieve that.

Real poses as the ideal destination, capable of giving him the platform to win major honours. Haaland is still only 20 years old and growing at an exponential rate.

Koulibaly is a strong and big centre-back who plays for Napoli. Watch & Bet Football Live >

The Senegalese centre-back has been heralded as one of the top centre-backs in world football in recent seasons. Furthermore, he has been part of a great Napoli team that tend to play the ball out from the back. This is a quality much needed in the Real Madrid defence.

The 29-year-old has played 38 times this season (in all competitions) and has scored three goals. That’s not bad for a defender.

He could become of the most expensive Real Madrid signings though as Real Madrid tried to sign him in the past and were quoted £100 million by Napoli according to reports. Watch & Bet Football Live >

The Inter Milan striker is highly rated and wanted by rivals Barcelona. He could replace Karim Benzema and the flop Luka Jovic up front. Technically gifted, the Argentine has all the tools to succeed at the highest stages.

His finishing is still getting better but Martinez fits the profile of a Real Madrid star.

Just 23 years old and flourishing in the Serie A, Bennacer could be the deep-lying playmaker to replace Luca Modric.

The former Arsenal player is getting better with each season. He knows how to distribute the ball and also pull his weight on the defensive end. Watch & Bet Football Live >

1. Neymar is one of the top Real Madrid transfer targets

Neymar’s future with PSG is at stake. He has less than two years remaining on his contract and both Spanish giants, Real Madrid and Barcelona are interested in him.

Eden Hazard’s signing is very quickly turning out to be a flop. And with Gareth Bale gone, Florentino Perez might sanction a deal for their ideal target.

Neymar would go down as a traitor for Barca but he could restablish himself as one of La Liga’s very best once again.